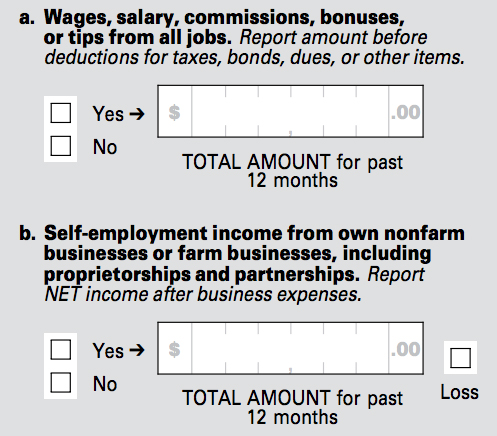 There are many American Community Survey tables which provide information on the income of people living in the United States. Even for releases of data collected over three or five years, income data is reported in inflation-adjusted dollars for the release year.

Most income data is reported at the household level, but there are tables which are focused on family households, as well as some which report on individual income. There are also some tables which are particularly applicable to understanding income inequality, including one, B19083 which provides the Gini index for a place as its only column.

Income is reported in a number of ways: as a median value, or as a series of medians for groups within a total population; as a number of people or households earning in a certain bracket; as well as a few other structures.

For all of these tables, income refers to income for "the last 12 months" prior to the survey response.

The various aggregate income tables provide the total amount of income, as well as broken down by income type, for the summary geography.

Table B19313 aggregates all income in the geography, which will produce a number somewhat higher than B19025 because it includes people who live in "group quarters."

Table B19301, "Per Capita income", is simply the value for B19313 "Aggregate Income" divided by the total population estimate for the summary geography. This statistic is more or less the 'average' income. Note the potential for misunderstanding: A) the aggregate income is divided among all people, not only those who actually had income, and B) as with any average, outliers (very big earners) can have a disproportionate effect on resulting figure.

For all of these tables, income refers to income for "the last 12 months" prior to the survey response.